Team called by Cumbria Police. Two walkers had been attempting the Wainwright memorial path route and one had become fatigued during the latter stages. They split up with one attempting to get aid. With very limited initial information we deployed two teams, one via Kentmere Reservoir and one along the Garburn pass via Dodds Reservoir.

At 00:40 one of the walkers was picked up by the police as he made his way to a road head. We then managed to locate the other walker,close to IIl Bell, informed him to remain were he was and sent the teams to his location. The hill party met with him at 02:30hrs and after an assessment proceeded to walk him down. After a steady walk and drive down, dropping the walker off with the police, the team finally got back to base at 06:00hrs. Just in time for breakfast, and for some, a quick kip before work.

The most interesting aspect was the location of the casualty according to Google !!! 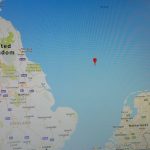