Team called by Cumbria police after a cyclist had come off her bike and injured her ankle. Fortunately, they were within sight of Mosedale Cottage, and were able to make it there for shelter. We sent some team members in via Gatescarth pass, another group from Wet Sleddale and requested assistance from Penrith Mountain Rescue Team as it was on the border of our two areas. The casualty was in good spirits and was evacuated via Gatescarth, and everyone was back by midnight. 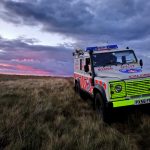 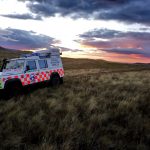