We would like to thank Don Shore, a founder member of the Kendal based “bootboys” walking group. Don, decided that to celebrate his 70th birthday he would organise a fundrasing walk with his group and with monies raised donated to the team. He visited our base and handed over a cheque to Team leader Dave (& Search dog Fern) for £2710.00. Dons full story can be read on their website http://www.lakeland-enterprise.co.uk/bootboys/bb17/bb1714.html 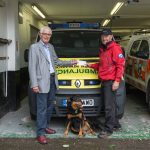 On Sat 3rd June Team members and Supporters descended on Kendal town centre for our annual fundraising day. We raised a total of £1350. We would like to say a big thanks to the people of Kendal. The team really appreciated the generosity and the messages of good will we received on the day.

Many thanks to team supporter (and former team members mum) Anji Thomson who successfully nominated (again) the team for a donation from the Phoenix trading company. We received a cheque for £50 as part of the sales from their Xmas charity cards. www.Phoenix-trading.co.uk