Kendal MRT would like to thank Harrison Drury solicitors and Armistead Barnett surveyors for the continued support as the chosen charity for this year. Last week we received the total of £1023.31 after the Northern sky gig earlier in the year. A cheque was presented to Kath jackson (Deputy team leader) and Steve Kelly (Team President) by John Osborne & Keir Walls. 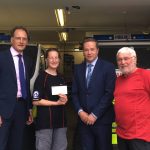 The next event is a charity walk undertaking the three peaks challenge. You can offer support and follow at www.charitychoice.co.uk/…/…/harrison-drury-yorkshire-3-peaks